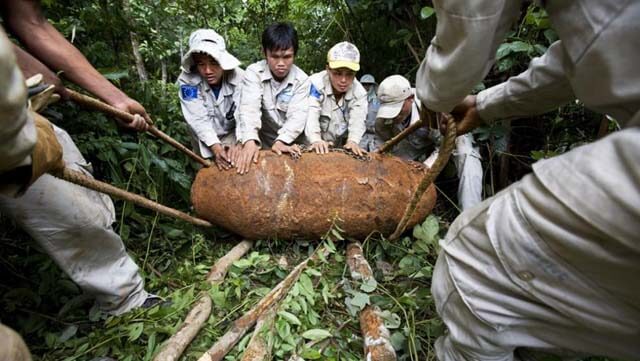 As drones become more commonplace, many companies are developing innovative uses of the technology beyond that of commercial and novelty robotics. In his SXSW Interactive talk on humanitarian drone use cases this weekend Ryan Baker, CEO of aerial imaging firm Arch Aerial, discussed his company’s hopes to deploy its drones to map out mine fields and locations littered with unexploded bombs from historical warfare. Baker suggested that his company wants to start the programme in Laos, the world’s most heavily bombed country – during the Vietnam War, the nation was targeted in over half a million American campaigns which dropped over two million tonnes of bombs across Laos. Laotians are still suffering the effects of a land riddled with landmines and unexploded cluster bombs. Ten of Laos’ 18 provinces have been labelled “severely contaminated”, with ‘tennis ball-size’ cluster bombs being the biggest threat. In Laos “there have been some 12,000 accidents related to UXO [unexploded ordnance] since 1973,” said Baker. He added that most of these deaths and injuries occurred during bomb disposal or when farmers are ploughing their land. Baker said that the ‘octocopter’ technology will work using a remote laser imaging platform called LIDAR to analyse fields and identify sites where UXO is likely to be uncovered. The sensor technology LIDAR is a crucial system in the design as it can easily see through vegetation and creates detailed maps of the terrain – even in Laos’ densely-vegetated forests. Surveyors will be able to use the maps to look for topographical signs which suggest past bombing activity, surrounding trenches and bunkers for example. Baker added that the programme was only possible thanks to great advancements in LIDAR technology: “A few years ago, a LIDAR system was the size of this table, and had to be fitted into a gutted airplane,” which required a lot of funding and compliance with local flight rules and regulations. He continued to confirm that Arch Aerial will start testing the drones this year in collaboration with a humanitarian NGO working on UXO in Laos. You Can Read More About LiDAR and Drones Here: https://archaerial.com/lidar-survey/

Work with those who are in the field week in and week out. Our #UAS Pilots (drone pilots) flew over 200 miles of pi… https://t.co/nyfv2kisVL about 1 day ago
Happy Monday! Here's a fresh look at one of the many @Medline Industries projects spearheaded by the top-notch… https://t.co/iqIBGwN0Za about 3 days ago
Progress continues with the team at @AP_Construction at the beautiful new Haslet Elementary School in the #Dallas… https://t.co/skXtaQ0emt about 1 week ago
Another successful #project with our outstanding customer @SVCCDallas and their project owner @SMU . It's impossibl… https://t.co/C6eEIAbEPt about 1 week ago
Hard work in progress by @CadenceMcShane at Skyline Commerce. #aerial #drone #services #construction #progression https://t.co/rhZ6lxh7A3 about 2 weeks ago