Click here for the original article by Destinie Holiday!

As part of the follow-up from major weather incidences, UH Facilities assesses possible building damage. Hurricane Harvey was no exception. Soon after Hurricane Harvey swept through Houston in August of 2017, building interiors, facades, and roofs had to be reviewed and then the damage is noted and put in order of priority.  Assessments began as early as September and ended in January. Over 150 buildings were completed during this tedious process. 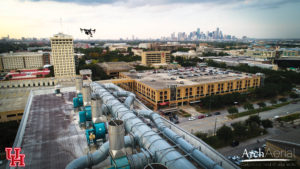 The fascinating part to this standard protocol was the introduction of UAV (Unmanned Aerial Vehicles), aka “Drones”. This was the first time drones were used on campus in a weather-related after-math assessment process. The advantage they carry is that they are a much safer alternative to a man-lift or walking roofs that have pitched angles. There are no potential harness issues or sidewalk closures. Drones are also capable of recording patterns using a pre-recorded flight pattern. This allows the operator to analyze the infrared images while in flight without concentrating on piloting the UAV (Unmanned Aerial Vehicle)  The infrared camera picks up heat from moisture that is trapped beneath the roofing membrane and then the image is displayed and recorded in multi-color spectrum based on temperature.

Drones also are capable of vertical wall and window inspections.  This would allow close up views of potential water infiltration points within a building envelope system, which normally would have to be performed either from a man lift or a window cleaning rig. It is the hopes of UH Facilities to be able to use this feature in the future.

Just like the pictures seen on the news from Hurricane Harvey, a drone picture will probably never fully grasp the full scope of damage but it definitely helps give more insight. Touching the roof surface is still needed to write-up a complete damage report.

UH Facilities appreciates the help of the Building Coordinators who accommodated the needs including access and tours for the buildings. A big thank you to Assistant Dir. Prevent Maintenance Services, Henry Anderson for coordinating these efforts along with Sr. Facilities Planner, Nick Tamayo.