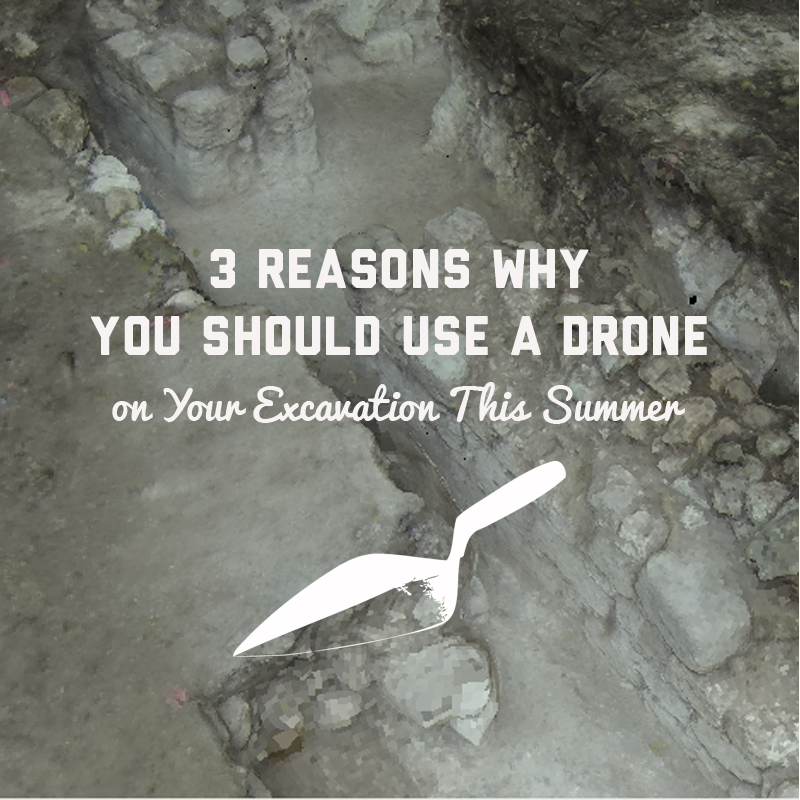 Let’s face it; you may only have a couple seasons at your current excavation site. This summer may even be your last dig season. Drones can help you survey and map your site faster than many other tools on the market.  Steven Wernke, an archaeologist at Vanderbilt, says that drones can vastly increase the speed at which you collect topographical information:

“By our calculations this vehicle (a semi-autonomous unmanned aerial vehicle) will be able to take imagery of an area in about 10-15 minutes that would take two or three entire field seasons using traditional methods.”

If you’re interested in gathering topographical information quickly and precisely, drones are the perfect solution.

2.  You Want to Protect Your Site

Sadly, looters and thieves are still a real threat to modern-day archaeology. An excavation site needs constant oversight and monitoring, both during on and off season. Drones can help set boundaries to protect endangered sites and watch over them.

“When a site is not properly demarcated, it is illegally occupied, destroyed, wiped from the map,” said Blanca Alva, an official with the Culture Ministry charged with oversight in Peru.

“We see them as a vital tool for conservation,” said Ana Maria Hoyle, an archaeologist with the Culture Ministry in Peru.

Drones can also create digital records of your site that can help build awareness and aid in the reconstruction of any damage. If you’re interested in protecting your excavation site, drones can definitely aid in the effort.

3. You Can Always Use a New Perspective:

Finally, a fresh point of view is priceless, whether it comes from the latest documentation, a newly discovered artifact, or cutting-edge technology. Case in point, archaeologists in southern Peru recently used a digital model to gain a new perspective on their petroglyph site. Viewsheds generated by the digital model provided additional regional context that connected their site to a nearby ancient footpath. The team specifically stated in their report that the new discovery was the result of a fresh perspective created by the digital model:

“In the case of Chichictara, it was the change in of perspective, obtained by the application of new documentation technologies that evoked further contextual insights. As in the case of the decipherment of Linear B, information about a frame of action and life form, mainly derived from latent structures, is a key for understanding.” (Fux)

Drones are a great way to get a new perspective on your research. Aerial photography and 3D mapping enable us to see an excavation site in, quite literally, an entirely new light.

To learn more about how drones and aerial photography can help your research, visit our website:

In the new (hopefully temporary) normal of #remote work, Arch Aerial #drone services are helping remote teams track… https://t.co/CgQwpKHzjw about 1 week ago
We’re grateful to be a part of Haskell’s project with Coca-Cola. Big things are coming to north Houston. https://t.co/ql7vLmTDHs about 9 months ago
Progress continues at Baylor Scott & White, an outstanding project by Adolfson & Peterson Construction. https://t.co/qDDT0C4e8V about 9 months ago
We hear it from our customers a lot: low-altitude monthly progress photos are a huge help for the project teams and… https://t.co/wzedfN1SRP about 1 year ago
Be sure you catch @ArchAerialLLC CEO Ryan Baker on this week’s episode of @OfficialOGGN ‘Oil and Gas Startups Podca… https://t.co/zRKdgsEz24 about 1 year ago